Stretch out and be heard with the Gretsch® G9110-L Concert Long-Neck Ukulele, which features a long scale and an onboard Fishman® Kula pickup/preamp system. Prized for its delicate tone, the concert-size body is now available with a 17″-scale and tenor mahogany neck that provide two more inches of string length and two more frets clear of the body for even better tone and more room in the upper register. Other features include mahogany top, back and sides, rosewood fingerboard and bridge, bone nut and saddle, open-back geared tuning machines, Aquila® Nylagut™ strings and fitted gig bag. 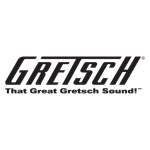 Get Back to Your Roots!

PIck up a Gretsch G9110-L long-neck acoustic-electric concert ukulele and visit the roots of modern music. The G9110-L features a traditional concert body style, with the same iconic sound that’s made ukuleles a mainstay of American music for over a century. The long neck design gives you even more notes to play with – you’ll love the way this all-mahogany uke sounds and plays. Take home a piece of American music history with a Gretsch G9110-L long-neck acoustic-electric concert ukulele from Sweetwater!

Part of their Roots collection, the G9110-L gives you a chance to own one of Gretsch’s earliest instruments. Everyone knows Gretsch electric guitars and drums, but did you know that they got their start in 1883 as a banjo company? It wasn’t long before Gretsch was making mandolins, ukuleles, and eventually flat-top guitars, contributing to the very roots of American music. So when you pick up a Gretsch G9110-L, you’re holding more than a great ukulele, you’re holding a piece of American music history.

Concert body gives you a sweet and expressive voice

If you’re looking for a mellower sound than a traditional soprano uke, then you’re sure to enjoy the slightly lower register of the Gretsch G9110-L’s concert body style. Many people also find the deeper concert body more comfortable to play and the longer-scaled neck gives you more room and more notes to play with.

To provide the G9110-L ukelele the warmth and projection of their classic models, Gretsch crafted its top, back, and sides from mahogany. Along with a bone nut and saddle, as well as a real rosewood bridge and fingerboard, the G9110-L gives you the bright sound you’d expect from a traditional uke.

Designed to bring out the naturally bright and full sound of your Gretsch G9110-L, the Fishman Kula ukulele onboard preamp system makes playing plugged in a real pleasure. It’s 3-band EQ gives you an extra level of control over your G9110-L’s sound, and a surface-mounted compartment gives you easy-access to the Kula system’s 9V battery. What’s more, the Fishman Kula system also equips the G9110-L with a handy chromatic tuner, something no ukulele player should be without.

For more than 100 years Gretsch has developed what came to be known as "That Great Gretsch Sound," but it all began with a young German immigrant in Brooklyn. Gretsch is an American company that manufactures guitars, basses and drums. The company was founded in 1883 in Brooklyn, New York by Friedrich Gretsch, a 27-year-old German immigrant, shortly after his arrival to the United States. Friedrich Gretsch manufactured banjos, tambourines, and drums until his death in 1895. In 1916, his son, Fred Gretsch Sr. moved operations to a larger facility where Gretsch went on to become one of the most prominent manufacturers of American musical instruments.

There are no reviews yet.