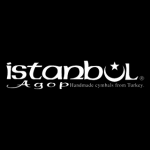 A series of signature cymbals offering flavor and versatility for styles from pop to Latin jazz, while offering the quality of traditional Turkish methods.

Designed for Horacio “El Negro” Hernandez, the El Negro series by Istanbul Mehmet has a sound and appearance as unique as Horacio’s playing. The splash cymbal features a specially brushed finish with an unfinished bell. The cymbal also offers a sharp, bright tone, quick decay and 5 rivets for a raspy sustain.

ABOUT ISTANBUL MEHMET
Mehmet Tamdeger learned his art from Mikhail Zilcan, the grandson of Kerope Zilcan, after whom the Zilcan K series is named. In the 1950s, he worked in the K. Zilcan factory in Istanbul. At the age of nine Mehmet Tamdeğer started to work for Mikhail Zilcan. Mikhail Zilcan and Kirkor Küçükyan taught him every aspect of this ancient Turkish art, based on a history that stems back to the early 17th century. The Istanbul brand name was adopted by a cymbal works established by two cymbal smiths, Mehmet Tamdeger and Agop Tomurcuk. At that time, they had over three decades of cymbal making experience. Mehmet and Agop named their company after the city that has been home to the epitome of high quality cymbals for many, many years: Istanbul. These cymbals were first exported to the U.S. in 1984, first under the name “Zildjiler”, and soon afterwards as “Istanbul”. Both craftsmen signed each cymbal and many of these cymbals are now collectors’ items. After Agop Tomurcuk’ s unexpected death in July 1996, Mehmet decided to continue the production of cymbals under his own name, Istanbul Mehmet. A lot has changed since then, but his belief in the richness and the character of a handmade cymbal will always remain. Machines don’t have ears. That’s why we continue to make our cymbals according to the ancient tradition – with an open eye towards the music that’s being made now, and in the future.

Istanbul Agop Istanbul agop logo.png Type Private Industry Musical instruments Founded 1980; 38 years ago in Istanbul, Turkey Founder Agop Tomurcuk [1] Headquarters Istanbul, Turkey Key people Agop Tomurcuk, Arman Tomurcuk, Serkis Tomurcuk, Mel Lewis Products cymbals Website istanbulcymbals.com Istanbul Agop Cymbals is a cymbal producer based in Turkey. Its products are well respected for their unique sound,[2] which is formed by the method and the alloy used, the formula of which is known only to the owners of the firm, Armenians Arman and Sarkis Tomurcuk. It is one of two companies that formed after the split of Istanbul Cymbals.